skip to main | skip to sidebar

The full "Ebert Presents At The Movies" website is now up and running!

Great news: the full "Ebert Presents" website is now up and running!  Live!  If you missed the debut of the show on PBS this weekend, you can now watch the first episode (in segments) on the site.  Just go to http://www.ebertpresents.com and click on "episodes".

Also visit the critics page, with all of the contributors to the show!  Enjoy! and watch PBS!
Posted by Omar at 11:54 PM No comments:

It's been just over 24 hours since the end of the 68th Annual Golden Globes, and the number one topic remains its host Ricky Gervais.

Many on Twitter and in the blogosphere in general have praised Mr. Gervais' comedy monologue and intros during last night's show, broadcast live on NBC television.

The reaction has been far more mixed in the mainstream media and among those in attendance at The Beverly Hilton, site of last night's awards bestowed by the Hollywood Foreign Press Association (HFPA).

Within hours, media stories raised the issue of whether Mr. Gervais would be invited back to host next year.  Some expressed displeasure toward the British comedian, writer and actor for his comments about Robert Downey Jr. and about the age of the cast of "Sex And The City 2" and Hugh Hefner, among other opinions.  Those were arguably the mildest references of the night.  A lot of what Mr. Gervais said was funny.  Much of it jabbed harder than the body blows sometimes launched at the annual White House Correspondents Dinner.

This was the second time Ricky Gervais hosted the Globes.  He first hosted last year.  The HFPA was happy to bring him back.  Like ABC when it hired Rush Limbaugh several years ago, the HFPA knew what to expect.  Last night Mr. Gervais often walked a tightrope on the order of the documentary "Man On Wire".  Except he rocked and wobbled frequently, but didn't fall off.

The audience reaction last night at an event typically more relaxed than the Oscars however, was telling.  Disapproving ohs were clearly audible, as were murmurs, particularly during Mr. Gervais' opening five-minute monologue, which is posted above.

Tom Hanks and Tim Allen mildly rebuked the host, as did Mr. Downey, following Mr. Gervais' references to the actor's drug rehab stints and jail time in the 1990s.  When presenting, Mr. Downey received fairly substantial audience applause as he remarked about the "mean-spirited" atmosphere being created by the show's host, whom he diplomatically resisted mentioning by name.  The "Iron Man" actor then made headlines himself (joking about sleeping with specific actresses), as did honoree Robert De Niro (joking about the deportation of the Beverly Hilton cooks and waitstaff, in what may have been seen by some as borderline racist comments.)

Nevertheless, in an otherwise blah show, the Globes and Gervais were perfectly imperfect together, making for spiky, queasy but entertaining television -- at least sometimes.  The Globes were mostly predictable, but what increasing numbers of people watch the telecast for are its unpredictable winners' speeches.

By contrast, with the Globes, and the abundance of food and drink in the room, there's no telling what the host, presenters or winners will do or say.  Nor how far they will go in the process.  An awards show that is still largely viewed either unfavorably or less seriously than other awards shows, the Globes were put on the map last night by its host.  And Mr. Gervais still has us talking, so he (or someone) is doing something right.

Sure, Mr. Gervais was inartful and below the belt at times during the live broadcast.  He said things more scathing than anything Chris Rock said at the Oscars when he hosted the more tony, serious awards show in 2008.  Then, Mr. Rock took on Jude Law, chiding him for being not such a great actor and saying that he needed to fire his agent.  Sean Penn pushed back.  Mr. Rock was never to be seen again on the Oscar stage.  Hugh Jackman took over in 2009.  The rest, as they say, was history.

If you thought Mr. Gervais went too far last night, and there were times that he gingerly stepped over the line, then you ought to be witness to Friars Club roasts in New York City.  I know people who have been.  Anything Mr. Gervais said last night was kids' play compared to what has happened at Friars, where it can get downright vicious and patently offensive.  Just ask Whoopi Goldberg and Ted Danson.

Had Mr. Gervais hosted the same way at the Oscars as he did last night at the Globes, he'd likely not be asked back.  At this moment it is not known if he will be asked to host the Golden Globes again next year.

If Bill Maher had hosted the Globes last night and said what Mr. Gervais did, would the reaction be the same?  Hard to say.  Mr. Maher is respected for being brash, thought-provoking and direct.  If Charles Barkley had hosted the show and opined instead of Mr. Gervais, would he have received a pass from the media?  Mr. Barkley is typically respected for the same reasons as Mr. Maher, and like the comedian and social-political commentator is generally liked by a considerable margin.

What if Sarah Silverman had hosted last night?  Kathy Griffin?  Joan Rivers?  Paul Mooney?  Louis C.K.?  Joaquin Phoenix?  Jack Nicholson?  Would it be better?  Worse?  Would they be invited back?
Posted by Omar at 11:39 PM 1 comment:

Early today the new logo (abbreviated above), website (http://www.ebertpresents.com), Facebook (http://on.fb.me/gzfr7F
) and Twitter (@ebertpresents) pages were unveiled for "Ebert Presents At The Movies", which premieres on PBS television on January 21.
Please visit often!
Posted by Omar at 11:59 PM No comments: 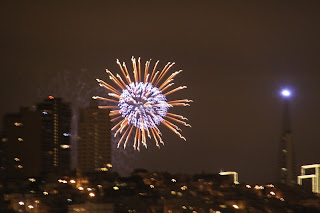 "Ebert Presents At The Movies" gets its close-up on January 21 on PBS television.  Ignatiy Vishnevetsky (@vishnevetsky on Twitter) joins Christy Lemire (@christylemire) as a co-host of the program, which will air in 48 of the top 50 U.S. markets.

Kim Morgan (@SunsetGunShot) and me (@popcornreel) will be two of the contributors, with Nell Minow (@moviemom), David Poland (@davidpoland), Kartina Richardson (@ThisMoiThisMoi) and Jeff Greenfield also part of the Ebert team.  I'm honored to be a part of this talented and illustrious group.

Please watch Roger Ebert's new show beginning on January 21 on PBS.  And if you are in Seattle (which is not carrying "Ebert Presents") please e-mail start@kcts9.org and demand that KCTS 9 air the show.

"Ebert Presents At The Movies", Coming January 21, 2011 to PBS Television 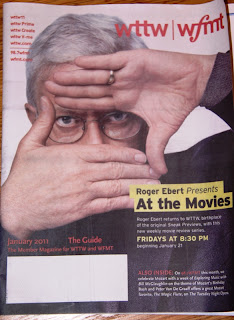 Whew!  Time has vanished in 2010.  I'm pleased to announce on this blog that "Ebert Presents At The Movies" is the new title of the show, which thus far is in over 200 affiliate PBS television markets in the U.S., with over 90% saturation nationally.  Armed Forces Network will carry the show internationally.

Roger has recently sent a link of this news with more details, including a PDF of the stations in the cities and states that will carry the show, which begins on January 21, 2011 on PBS.  Some further news about the show and who will be its co-hosts and contributing critics is to be announced in the near future.

The January 2011 television brochure pictured above is from the show's flagship station WTTW, based in Chicago, where the show will be based.

You should hear some official announcements from one of the show's producers, Chaz Ebert, soon, so stay tuned!

Merry Christmas!
Posted by Omar at 11:23 PM No comments:

I'm back! And a word about "Roger Ebert Presents At The Movies"

I've been away from this blog for far too long -- one month shy of one whole year away.

October 20, 2009 was the date of my last post here, but now I will be updating this blog much more often!  In these intervening months I have been wondering whether Twitter and Facebook have made blogs more or less obsolete.  I'd be foolish to answer "yes", but Twitter is where I have been spotted on numerous occasions over the last year.

A great deal has happened since October of 2009, including the announcement ten days ago (September 10, 2010) of Roger Ebert's new movie review/film criticism television show "Roger Ebert Presents At The Movies".  The new show will air on PBS television in the U.S. beginning in January 2011.  Roger will be joined on the show by lead co-hosts Christy Lemire (pronounced "Lem-eer") and Elvis Mitchell.  They will review the latest new film releases.  Kim Morgan and me will be substitute co-hosts and contribute various feature pieces to the show, which will air each week and be a total of a half-hour in length, and without commercial interruption.  Chaz Ebert produces.

Here's a statement about the show that I published on my movie/interview/essay/video website The Popcorn Reel on Saturday, September 18.
Posted by Omar at 10:16 PM No comments:

The Scare Power of the "Paranormal"

A scene from the hit film "Pranormal Activity". (Paramount Pictures)

While The Popcorn Reel will be returning in full force very soon with a ton of updates -- my computer crashed hard two weeks ago and I've had to do some extensive recovery -- I will be posting stories here that I'm currently writing for The Examiner newspaper group. I recently became the San Francisco Indie Movie Examiner writer, as well as a member of the San Francisco Film Critics Circle.

Halloween is coming, and earlier this week I wrote a story about the cinematic phenomenon that is "Paranormal Activity". Take a look.
Posted by Omar at 4:17 AM No comments: